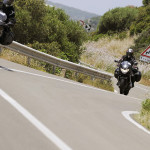 The SS128 National road, very close to La Escolca, is one of the most beautiful roads in Sardinia and is especially loved for its curves and for its beauty (like certain lovely women). It’s not always possible to appreciate the bends in a car as much as on a motor bike, what’s more all seasons are good for touring Sardinia on two wheels. I have seen and hosted motor cyclists from all of Europe, in different parts of the year and of all ages, all enamoured of these roads.

Follow the SS128 to Atzara,then take the SP6 Bis towards Belvì, considered one of the most exciting stretches for motor cycling due to the quality of the tarmac, the opening and closing of the curves, their rhythm, the chicanes, the countryside, the deafening silence of nature. The rhythm that the road communicates to the rider is the dream of every motor cyclist who, like a pendulum, wants to swerve rhythmically from side to side. Every oscillation accompanied by ritual gestures, revving going into the curve, the game of clutch release and the change down of gear, the rider’s body leaning slightly into the bend to help the bike on the curve.

Repeated over kilometres it is a hypnotic ritual that frees the mind to enter into symbiosis with the countryside and pass into another dimension, between woods of lecci and rare animals, towards Seùi. For the bikers there is an appointment on the bridge of the Flumendosa between Seulo and Gadoni before following the SP7, passing throught the villages of Belvì, Aritzo and Seulo, going through two Barbagies up to Ogliastra.