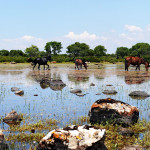 Walking on the Giara, following its 14 km long path through the signs that man has left over 3500 years, is an extra sensorial experience 45 square kilometres of rock, woods of holm oak and cork, the typical flora known as ‘macchia mediterranea’, with a very high concentration of botanic species in an area that is preserved to resemble a natural museum, once surrounded and maybe even defended by 23 Nuraghe. All of this is the Giara of Gesturi, a basaltic high plain of volcanic origin, fruit of nature’s capricious creativity. Situated in the center of Southern Sardinia west of the gulf of Orestano , between Marmilla, Trexenta, Sarcidano and Arborèa, the giara includes the communities of Gesturi, Tuili, Setzu and di Genoni extending over an area of 42 square kms about 600 metres above sea level.

The Italian name ‘giara’ is from the Sardinian ‘jara’ , used to indicate various basaltic high plains, in fact besides the antonomasia giara – of gesturi – there are also the giaras of Siddi and Serri. The term probably derives from ‘glarea’, or ‘ghiaia’, coarse gravel mixed with shingle, which covers the entire surface of the zone. The giara of Gesturi is internationally famous because of the small wild horses which live there, perfectly in tune with the environment. This animal (Equus Caballus Giarae) is a mix between a horse and a pony and has a dark coat. The average height is about 1.2 metres (at the withers) It has been on the plain since ancient times as its remains in archaelogical sites can testify. In the characteristic ‘paulis’, depressions where the basalt rock holds water, you may see the horses peacefully grazing. In the right season you can also see the spectacular flowering of cyclamens, violets and splendidly coloured orchids, as well as wild saffron (zaffaranu), anemones, daisies, marguerite, cornflowers, hawthorns and pear trees. I hope you’re convinced!